“I wandered lonely as a Cloud” by William Wordsworth 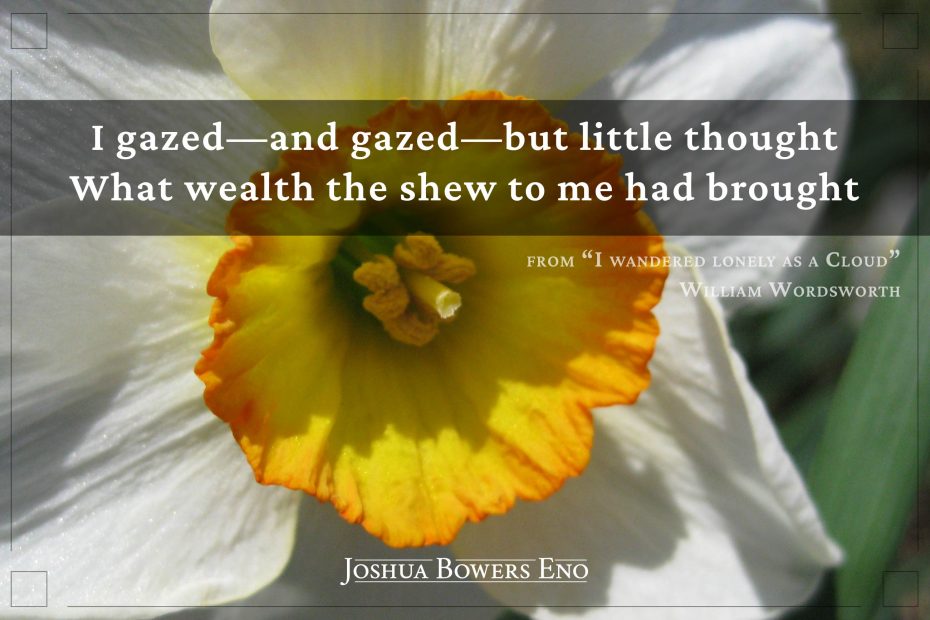 Running Barefoot in the Grass

It was evening, and the summer air was folding into dusk. Other children were there. We played on an open space of grass, running—playing tag, throwing a ball, some other energetic endeavor I cannot recall. I had taken off my shoes. I was running barefoot in the grass.

Later into my childhood, I kept my shoes on. There were sticks, you know. And bees. I was stung through my sock once—a story for another time.

But that evening, I mashed my naked feet into the cooling carpet of a lush day’s closure—dodging, rolling, likely as not.

My memory of that evening hangs vaguely at the edge of recollection. It is not one of the chief events of my life. I am not entirely sure it was in my childhood at all—perhaps it was later, into my teenage years, or even later (when, after all, childhood comes round again for one final excursion before the onset of adulting).

But it is a memory that, despite its relative obscurity in the catalog of my life, I have found myself coming back to now and again over the years, often in a momentary flicker.

And I feel something when I reflect on it: something about freedom, about vigor and vitality, about being where the action was, and staying until the lights went out.

Life contains these unremarkable moments which nonetheless keep surfacing from time to time. Sometimes they may cast the shadow of regret. But other times, they bring a reminder of something greater, something higher, which can sometimes still be glimpsed.

Sometimes you encounter something that you don’t fully process until you have a minute alone with your thoughts. William Wordsworth paints such a picture in his poem “I wandered lonely as a Cloud” (or “The Daffodils”).

I wandered lonely as a Cloud
That floats on high o’er Vales and Hills,
When all at once I saw a crowd,
A host of golden Daffodils;
Beside the Lake, beneath the trees,
Fluttering and dancing in the breeze.

Continuous as the stars that shine
And twinkle on the milky way,
They stretched in never-ending line
Along the margin of a bay:
Ten thousand saw I at a glance,
Tossing their heads in sprightly dance.

The waves beside them danced, but they
Out-did the sparkling waves in glee:—
A Poet could not be but gay
In such a jocund company:
I gazed—and gazed—but little thought
What wealth the shew to me had brought:

For oft when on my couch I lie
In vacant or in pensive mood,
They flash upon that inward eye
Which is the bliss of solitude,
And then my heart with pleasure fills,
And dances with the Daffodils.

So what’s with the title? Is it “I wandered lonely as a Cloud,” or is it “The Daffodils”? And didn’t Wordsworth know how to capitalize?

More on the capitalization below, but the question about the title is a trick question: this poem doesn’t have a title. Sometimes poets don’t put titles on things. And since “Untitled” is a pretty ugly thing to put at the top of a poem, the normal thing to do is just refer to the poem by the first line.

It’s the same way with a lot of well-known Christmas songs. “Hark! the Herald Angels Sing,” for instance, is really just the first line of the song. Same is true for “O Little Town of Bethlehem.” But with poems, it’s typical not to capitalize all the words when using the first line like a title.

But this poem has become known as “The Daffodils,” or just “Daffodils,” so you might see it with that title. That makes sense. “Daffodils” is a lot shorter than “I wandered lonely as a Cloud.” And the poem’s really about daffodils anyway, not clouds, even if the description of the daffodils is kind of like what a cloud might see when looking down. Not that clouds can see anything. But anyway.

Some of the words in this poem are a little old school. That’s OK. Just make sure you know what all the words mean, and you’ll communicate that meaning to others as you perform the poem.

As you perform Wordsworth’s “I wandered lonely as a Cloud,” use your hands and voice to make the words come alive. Here are some tips:

Use this recording to help you memorize Wordsworth’s poem. Play it on repeat until you get it, and don’t forget to come back in a few days to practice and make sure you’ve really got it.

When daffodils are blooming, William Wordsworth’s “I wandered lonely as a Cloud” should come easily to mind. But really any flower, or anything beautiful or striking, would do. It is a poem rich with memory, so anytime you find yourself in a group of people sharing memories, you might find an opportunity to perform this poem.

So memorize it, perform it, and drop a comment about your experience.