“The Rhodora” by Ralph Waldo Emerson 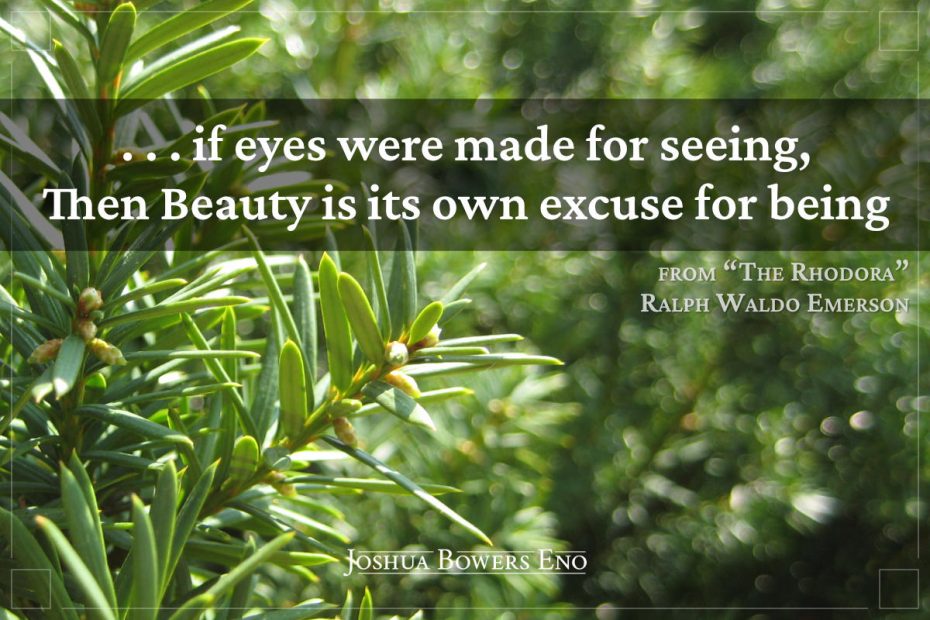 Our mall used to have an Old Navy store. One day I was there, meandering through the men’s section, and on the back wall I found a rack of wild socks. Stripes. Checkers. Skulls. OK, I wasn’t too keen on the skulls. But these were the most amazing socks I’d ever seen in a store. I mean, like, you can buy these? I double-checked. Yes, I was still in the men’s section.

And the socks were on sale.

Probably no one else wanted them. I bought several pairs. Some of them are still with me — I wore a pair just yesterday. Though they’re getting thin, they still have the same pizzazz.

It’s getting harder to fit them in my sock drawer, though, which has filled to the brim with all manner of patterns and colors: polka dots, argyle, chevrons, teal, purple, orange. I smile, knowing my early-adopter fashion sense has been vindicated by the likes of Happy Socks and the Awesome Socks Club. A few years ago, I even found a rack of tastefully decorative dress socks next to the suits at Kohl’s.

Beautiful socks are sprouting everywhere you look. Sometimes you see them, sometimes you don’t.

I rarely wear a plain black sock to work anymore. Life is too short for boring socks, right? But they are seldom noticed anyway. There they are, tucked behind my swishing pant cuffs — sometimes they peek out, and someone will compliment me on them.

I think seeing my patterned socks can brighten someone’s day. But I’m OK if no one says anything. Beauty, after all, is its own excuse for being.

So says Ralph Waldo Emerson in his poem “The Rhodora,” a reflection on a beautiful flower blooming in an unlikely, lonely place.

“The Rhodora” by Ralph Waldo Emerson

From The Early Poems of Ralph Waldo Emerson, 1899

On being asked, whence is the flower?

In May, when sea-winds pierced our solitudes,
I found the fresh Rhodora in the woods,
Spreading its leafless blooms in a damp nook,
To please the desert and the sluggish brook.
The purple petals fallen in the pool
Made the black water with their beauty gay;
Here might the red-bird come his plumes to cool,
And court the flower that cheapens his array.
Rhodora! if the sages ask thee why
This charm is wasted on the earth and sky,
Tell them, dear, that, if eyes were made for seeing,
Then beauty is its own excuse for being;
Why thou wert there, O rival of the rose!
I never thought to ask; I never knew;
But in my simple ignorance suppose
The self-same power that brought me there, brought you.

Emerson uses some fancy, old-school language in the poem. But no fear! You can learn what these words mean, and once you know them, you’ll rattle them off like anything else, and the person you perform the poem for will be able to understand too.

Try these tips to make your performance of “The Rhodora” by Ralph Waldo Emerson come alive.

Use this recording to memorize “The Rhodora” by Ralph Waldo Emerson. Play it on repeat until you’ve got it down. Don’t forget to come back to brush up in a week or two.

Maybe you notice someone’s flashy socks, or maybe some other opportunity brings up the topic of hidden beauty. When that happens, take the chance to perform Ralph Waldo Emerson’s “The Rhodora.”